Last weekend I was invited to enter the Windsor Triathlon in the Race with the Stars wave. This was my first ever opportunity to race in with in a competitive field with some athletes who were elite/ professionals. The only downside to this was that the race fell on the same weekend as the ITU triathlon event in Leeds, which meant I had to choose between them, and I potentially would miss out on competing against some of biggest names in triathlon.

I tried not to think about who I was potentially coming up against in the week leading up to the race. However, this went out of the window on the day before when I placed my bike into transition to rack it. We had our own little paved area right in front of the castle, whereas the main field had to rack their bikes on the grass! Whilst I was racking the bike, I couldn’t help but notice the quality of the bikes in the elite section, these guys weren’t messing around! The fact that I would also be starting alongside men, as well as women, started dawning on me also.

Race morning was a significantly different experience to what I was used to. I was considerably more nervous than normal. It was a very strange feeling not knowing who I was racing against. Whilst getting ready in transition everyone was keeping themselves to themselves and the atmosphere was a lot more serious. I usually enjoy a nice chit chat to calm my nerves before a race, but this wasn’t possible here. I just kept my head down and got myself ready and made my way to the start.

We were the last wave of the day to go which was also a new experience for me. The organisers left a 30minute gap between the last age group wave and ours meaning it was nice and peaceful by the side of the river Thames when we set off. The race start was in the water which is not uncommon. What I wasn’t used to though was the very strong current of the river. Even before the race had started, we had already started drifting past the line and into eachother.

The race starter said we still had 3 minutes so everyone had to turn around and swim upstream and hope that we weren’t pushed too far downstream by the time the start horn rang. Due to the quality of the field, I couldn’t help but think I was about to get slaughtered in the swim but it actually wasn’t as bad as I thought it might have been. However, I did manage to swim into the ropes at the turn around point, with a canoeist shouting at me to stop. I turned around to see a load of people I had passed going past me again! This made me really angry. I thought we had to swim around the last buoy, not turn before it. So then on the upstream section I had to work really hard to catch the group back up again.

Once I got out of the water, I started the very long run into the transition area, which seemed to take forever. However, it at least gave me time to laugh at my mistake with my friend, Natalie, as I ran past her. A long run from the swim to transition is extremely difficult when I have to do it in a wet suit! Hard work.

The bike course was really scenic and lovely, until the rain started hammering down. I enjoyed most of it, as I knew I was catching and over-taking lots of people but had no idea what position I had got myself into. There were a few problems where we were catching the earlier slower cyclists up, and cars were getting stuck behind them and that ended up with us getting stuck behind the cars. Having to break on a downhill part of the course is incredibly frustrating. I had one slightly scary moment at a dead turn, where I was so worried about getting around the turn due to the wet conditions I made a rookie error and forgot to change down my gears. I changed mid turn and there was an almighty clunk, where I thought my chain had come off and a jolt went through my knee. I shouted quite loudly, but fortunately my chain and knee where fine. This made me quite cautious for the remainder of the bike leg though.

Onto the run, I managed to find Natalie in the crowd, and she shouted to me that I was in 4th position. I didn’t quite believe it at first, and only managed to shout ‘4th????’ back at her in a quizzical manner! I also knew that the woman who was 3rd was just out in front of me as she’d left transition just as I came in. So my aim on the run was to get a spot on the podium which I certainly hadn’t envisioned prior to the start. Sometimes it can be hard to work out what position you’re in because of all the other age groupers still on the course.

The run was 3 laps on closed roads around Windsor. I quickly caught up with the lady in front of me and kept pushing on. It wasn’t until the 2nd lap that I noticed Emma Pallant was racing! For people who don’t know who she is, she’s the double Elite World Duathlon Champion! I remember thinking that I had been sat at home the weekend before watching her on TV! Just before the end of the 2nd lap two guys ran past me and said “1km to go” which was incredibly mean as I still had another lap! By the third lap the number of competitors on the course had thinned out quite substantially so it was very hard to keep up the pace.

As I approached the finishing line I could hear the commentator say the 2nd lady had just finished and I was pretty sure there was no one else between us. I crossed the finishing line and saw my friend and cried. The fact that I had finished 3rd in my first ever elite race, and would be standing on the podium alongside someone like Emma Pallant, just got a bit too much for me at that point. That might sound silly to some of you reading this but when you’ve just raced for 2hrs and given it your all, your emotions are all over the place at the end.

Simon and Helena, co-founders of True Start Coffee, one of my sponsors, were also at the finishing line. It was so great to be able to celebrate with them as they are such lovely people and their enthusiasm is contagious. No wonder their product is spreading like wildfire. When I went and collected my things from transition, everything was soaking and my helmet even had a puddle of water in it… I eventually managed to dry off and warm up after some lovely True Start Coffee and we headed over to the medal ceremony.

These events are always sponsored by a large company, and this one was supported by Erdinger, the beer manufacturer. Those of you that have raced at one of their events before will know that winners of these events get a rather large glass of beer to throw over the other podium finishers. I have always wanted to be a part of this; mainly for the glass rather than the beer throwing part.

There were actually 6 of us on the podium as we shared each step with our male counterparts. So, after collecting my lovely bunch of flowers and pose for a lovely a podium photo, we were asked to wait for the men to join us. At this point, someone kindly and fortunately suggested that I remove my footwear (I was obviously a novice to this experience). I was still trying to juggle my large glass of beer whilst climbing back onto the podium when I got drenched! I gave as good as I got though…. Once it was all over, I realised there was no way I could travel back home covered in beer. Thankfully someone was again on hand to suggest to me that there was a standpipe in the Park. I then proceeded to hose myself down in the middle of Windsor! Thankfully there is no photo evidence of this, to my knowledge…

Looking back on the weekend now, I’m extremely proud of my performance at Windsor. Starting to compete in against elites has been my aim for quite a while now, so to not only be able to tick that off my to do list, but to also be able to say I finished on the podium in it is a wonderful feeling. Still, that probably means I need to aim to win one of these races now…. Till the next time! 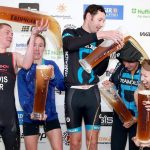 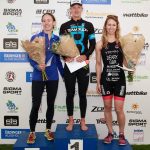 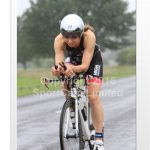 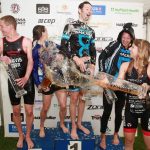 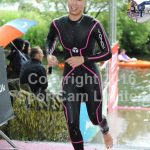 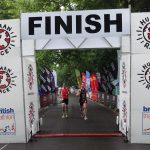 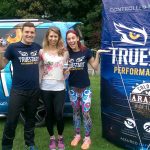 In this episode we talk about Emma’s pre-Ironman thoughts, recorded the day before Outlaw; and we enjoyed talking with special guest 13 year old Eleni, from whom we gained insight (and parental judgement) into her triathlon and daughter-of-a-triathlete experiences.

In this episode we talk about Emma’s pre-Ironman thoughts, recorded the day before Outlaw; and we enjoyed talking with special guest 13 year old Eleni, from whom we gained insight (and parental judgement) into her triathlon and daughter-of-a-triathlete experiences.