On Sunday 18th September at approximately 09:04 I became World Champion in the Female 25-29 age group. Even writing that now makes me emotional. At the beginning of the season I set myself a goal of getting on the podium at both the European and the World Championships. Having won a silver medal at the Europeans I was hopeful of finishing on the podium in Cozumel. It’s tough to predict though because I had never raced against most of my competitors before.  Also, the hot and humid conditions in Mexico were a concern prior to the race.

We arrived on the Tuesday before the race after an incredibly long journey. It took over 22 hours and involved just about every method of transport invented (car, plane, bus, ferry and a taxi!). We stayed at a resort which seemed to be the unofficial Team GB hotel as there were so many of us staying there. It was an all inclusive hotel which meant food and hydration wasn’t an issue, although eating and drinking too much might have been…. We met some really lovely people during our stay there, which is just another reason why I love being part of the Triathlon community.

From the minute the sun rose above the horizon at 6.30am every day, it was hot! There was the occasional respite from the heat with a heavy shower. Sometimes this would lead to some flooding but before long the sun was back out again. For race day we were praying for some rain on the run as the route was absolutely brutal. It was dead flat but didn’t have a single metre of shade.

Swimming in Cozumel was like being in a warm bath. We also had fish swimming all around us including plenty of Dory’s. This was a bit intimidating to start off with but once I’d got used to it, it was a magical experience.

The bike route was flat and reasonably well shaded. I was also expecting a bad headwind but there wasn’t really one at all, just enough of a breeze to keep us cool.

We racked our bikes on the Saturday afternoon, which is always when the magnitude of the occasion starts to sink in. Until this moment, the trip had felt more like a holiday because we were relatively removed from all the hype of the event and away from the race. However the sheer size of the transition area along with watching the women’s Elite race, I couldn’t help but start to get nervous.

My race start was 06:58am on Sunday morning, which required a 4am alarm call! This also meant that after our taxi ride into town, I had  to set up my stuff in transition in the dark. My bike was really damp and soggy from the humidity overnight which made everything sticky! Lovely.

As we headed over to the swim start I heard over the tannoy that the swim distance had shortened from 1500m to 1250m due to strong currents.  This was quite daunting news for me because I had only just got my head around the fact we weren’t allowed to swim in our wetsuits because the water was 29deg C.

Prior to the start we were held in a pen and before we knew it we were jogging down the gangway onto the pontoon. The officials shouted that we had 3minutes before our start, so I jumped in and was keen to get warmup done. When I turned around to go back to the pontoon I almost couldn’t make it because the current was so strong. After a bit of a struggle I made it back and braced myself for the start. I’ve heard that people get nasty in non-wetsuit swims so I had prepared myself to take a few hits. However it wasn’t as bad as I thought it would be, and I managed to stay with a few people most of the way round. There were moments when the current got stronger and pulled me apart from the group but I managed to get back to them each time. One other issue was that  the current would move the buoys. With every stroke it moved, making us zig zag all over the place. As I went around it, one buoy actually went over me. Apparently there were scoober divers taking photos under the water too but I didn’t see any fortunately as I think it would have freaked me out. My swim was by no means a quick time but I came out about where I would expect, as the whole field was slower due to the currents.

The run from the water to transition was about 500m which involved lots of stairs and bridges. I ran into transition and somehow managed to find my bike amongst the thousands of others and headed for the exit. However, on the way out someone had crashed into the railings right in front of me whilst putting their shoes on. Fortunately I saw them just in time and managed to avoid them, but that certainly got my heart going! As I headed into the bike course I knew I had to chase down quite a few people. This was hard as the roads were long, flat and a bit boring but I tried to keep in the zone and not let my mind drift. I kept passing loads of women in the 18 and 20 age group categories but not many people in mine, which was frustrating. It is almost impossible to know where you are in these races, so all you can do is push. I successfully navigated the dead turn at the half way point and made my way back to transition.

Now onto the run. This was where were were entering the world of the unknown. How far could we push ourselves in this heat? How would we cope? There were 4 water stations on the 5km loop, which meant that there were 8 in total over the 10km. At the first station I think I threw 5 cups over my head. At the next one it went over my head and some ice went down my top. I repeated this at every station as I was really worried about overheating. It wasn’t until the 6th aid station that I realised that my eyes had started stinging because some of the cups weren’t water, they were Gatorade….

Running with ice cubes around your stomach was a new experience but it helped distract me from the severe heat. The crowd on the run course were incredible. It makes so much difference to your race when you’re trying to put on a brave face. The last 3km I really pushed and the finishing straight seemed to go on forever. Never have I been so relieved to see a finishing line. The guy in front of me saw a blue gantry and actually stopped and celebrated but he was about 200m too soon! When I crossed the line I had no idea where I had come. It wasn’t until about 2hrs later that they posted the provisional results. As I crossed the finishing line, a very kind volunteer swept me along and helped me take my shoes off (I had very sore/ wet feet) with very wobbly legs. The run was brutal and us Brits certainly weren’t used to it. I really don’t know how I managed to cope. I was also the 2nd fastest female overall which I’m equally as shocked about.

They were handing out shell necklaces, red roses, pizza and coconuts at the finish line! Just another reason I love this place. After this, we all jumped into massive ice baths.

That evening we went back into the town for the medal ceremony. There was a wonderful atmosphere there and it was lovely to celebrate with everyone at the event and back at the hotel. I’ll certainly never forget that feeling of stepping onto the top step of the podium.

As I am writing this, I am sat under a palm tree on a beach, sipping on a pinacolada. This is a very much needed holiday after an extremely successful but also tiring season. I’ve got the start of winter training to look forward to when I get back.

I know I’ve said it before but I really can’t thank my family, friends and sponsors enough. They really have been fundamental in every way. Their help ranges from last minute panic questions to my coach and physio, to gym access, bike repairs and financial support. A very special mention also to my boyfriend for putting up with me, dragging him around the country, for all my races and making him miss the start of his hockey season to support me. I hope a gold medal and Mexico makes up for it!

Until next time, Buenas noches 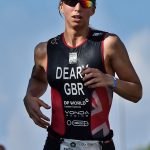 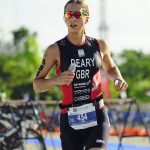 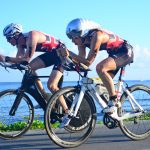 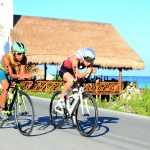 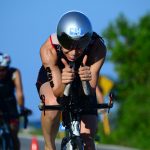 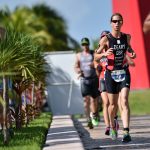