I am a National Champion! I finished 1st in my age group (F25-29) & 3rd overall in the English National Triathlon Championships on Sunday. This ranks as one of the achievements I am most proud of since beginning to compete in triathlons. I finished 2nd in my age group in last year’s National Championships (Deva Triathlon in Chester) so I’m over the moon to have been able to move up one step on the podium. I’d like to say congratulations to both Lucy Charles & Alice Sharp who finished ahead of me in the overall standings. Being the 3rd best female triathlete in the country provides me with further determination to improve, especially when I look at both of their incredible swim times.  Their times are even more impressive when you consider that the water temperature was at the minimum legal level (12ᶜ) for that distance (1500m). Let me tell you, it’s beyond cold at that point, but I guess it’s the adrenaline that gets you through it.

Once the swim is over, it’s often a problem trying to get your hands to function once you’ve left the water. The sole of my foot is bruised at the moment, which occurred whilst exiting the reservoir and scrambling over the rocky shore. I only discovered this the next day because at the time my feet were so numb, I didn’t feel a thing. Once you’ve finished the swim and made it into the transition area, the next challenge is taking my wetsuit off with very cold and numb hands. According to the transition times, I’m actually pretty good at this and that can only be attributed to my Yonda Wetsuit. I find the neoprene considerably more flexible than my previous one, and it’s made a significant difference.

he bike course was simply a joy to complete. The route contained undulating, but fast and technical portions, also with sweeping descents. Being able to see where I am going on descents is important to me.  If this is not the case, I can sometimes get nervous and sit on my brakes which loses valuable time.  The course was quite busy due to the large number of entrants, which was added to by a group from a local cycling club! They hadn’t entered, but had decided to go out for their leisurely Sunday bike ride at the precise time and location of the triathlon. Needless to say, it got a little hairy at times.

Immediately prior to the race, I realised its importance to me, just by simply appreciating how nervous I was.  I had a thousand things running through my mind, such as “do I have enough water with me on the bike?” or “how would I manage in the heat on the run?”  This was a big race for me because it was the first properly competitive one I had entered this year.  It was also the first time I’ve raced in open water this season which didn’t help the nerves.

The run itself was gruelling! It wasn’t amazingly hilly but it certainly wasn’t flat either.  It was also one of the hottest days of the year so far and a lot of the course had no shade.  A large proportion of the running surface was gravel which has led to a few interesting blisters on my feet and a slightly awkward walking style this week…. This part of the race, especially on an out and back course, gives you the best understanding of how far ahead or behind you are from your competitors.  This can be both a huge encouragement to push on if you feel you’re catching people in front of you or increasing your lead to people behind.  However, on the other side of this, it can also be demoralizing if people are catching you or people ahead are increasing their lead.

One of my favourite things about competing in triathlons is the support from the other athletes.  You’d think during the race, everyone would be focusing solely on themselves, but you’d be wrong. People are running for their lives but they still find the time to provide encouragement, tips or even an update on how far ahead someone might be! I love this about the sport. I always try to smile and encourage others on, especially on the run when you are completing a tighter circuit than on the bike.  Sometimes though, the best you can manage is a smile or a grimace.

Usually, I have no hesitation in adding a number of photos to accompany my blog writing, but this week is slightly different. The photo of me crossing the line on Sunday is not the most flattering one that’s ever been taken of me. However, I have included it because I’ve been explaining how difficult this triathlon was to complete, and like they say, a picture says a thousand words!

Looking forward, the European Championships in Lisbon are now only 19 days away.  My success at the English National Championships has provided me with an excellent start to the season. Now, I need to build on it! 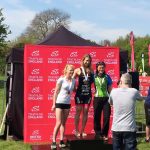 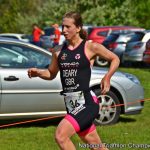 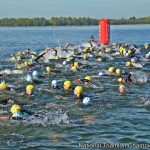 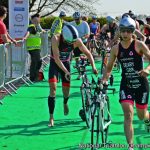