A victory and a course record at Outlaw X

A big domestic win and my first course record! Not a bad way to end the 2021 season. I find myself hitting my peak on my last race, so am extremely reluctant to stop racing for the year but we decided it would be best to end on a high.

Here is a quick breakdown of the day:

The venue was stunning but due to it being based on private land we were unable to see the lake at all prior to the race start. This was a bit disconcerting because I like to be able to get my bearings beforehand but it was reassuring to know everyone else was in the same situation.

The Swim – this certainly wasn’t where I won the race, that’s for sure. It was a staggered start, so 1 person would jump/dive in at a time. I unintentionally ended up doing a hybrid of jump/dive and kind of did a running bomb into the water. Not my proudest moment. I’ll work on this for next season in case it happens again. The swim was quite a lonely one as I was by myself for a lot of it, which is never ideal.  Based on my time it looks like I had a nice leisurely paddle around the lake to start my day. This was then followed by a very long run up to T1.

Bike – I came out of T1 with two other ladies, one of whom was Debbie Greig who I raced at Outlaw Holkham Half in 2017. We’ve both had children since then, in fact she’s had two, super-mum! I got left by both ladies almost immediately though as it took me ages to get going, faffing about trying to get my feet into my shoes. I’ll add bike transitions to the list of things to work on in the off-season…..

I absolutely loved the course, it had plenty of rolling hills. I caught and passed Debbie and thought I’d managed to put a good distance between us, but we ended up constantly swapping positions for the rest of the course. She was faster up the hills and I was faster on the flats and downhills so she would disappear out of sight then reappear again. In the final few kms we caught another female up and ended up all coming into T2 together.

Run – The issue with the rolling start on the swim became apparent when the run started. You can be running alongside someone and you have no idea whether they started before or after you. It can be very difficult to know your position in a race in these circumstances. I knew that Debbie had started after me, although didn’t know by how much, so I just went as hard as I could to try and build a gap, I hoped would be enough.

After finishing lap 1 of a 3-lap course, a lead cyclist on the course shouted coming through. I thought it was 2nd bike leading the 2nd female in the race – Debbie was catching me, so dug in and pushed as hard as I could knowing there were still 2 hilly laps left. After about half a lap someone ran right behind me. I took a little glance over my shoulder and it was actually the leader of the men’s race! What a relief. I wasn’t receiving any time splits or updates on where I was compared to the other females as the internet was rubbish. On the plus side, it makes you run right to the line, which helps set a good time. This was confirmed to me when I was told I’d set a new course record and won the race!

This was very much a team effort and I am extremely grateful to them. The team includes my husband for making it possible, my coach Perry and my sponsors for sticking with me through my pregnancy and return to racing. 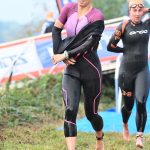 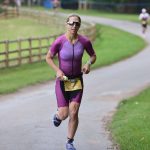 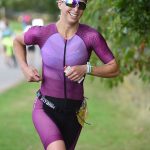 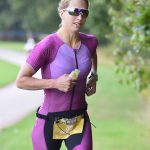 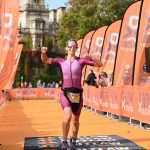 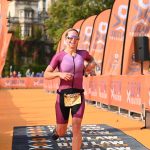