Don’t worry, I’m still here, and sorry for the silence. It hasn’t quite been the start to the year I had I mind. On the first weekend back after my 1st of 3 planned training camps, I was out on a bike ride on roads I’ve cycled hundreds of times. There was some grease/oil on a corner and before I knew it, I came off my bike and hit the deck, hard, landing straight on my right shoulder. I’ve always wondered how people fall off going around corners, well now I know how easy it is. And no, I wasn’t going too fast around the corner! 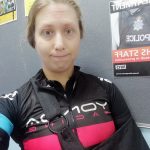 After being rescued by some local villagers, and kindly invited to their village breakfast (a two-course feast after their local park run) my friend picked me up and took me straight to A&E.  Following the customary long wait, I received the news I both feared and expected. I had a break to the top of humorous (the ball of the ball and socket in the shoulder). A follow up appointment at the fracture clinic confirmed this and the doctor said it could take up to 12 weeks before I could start using it again. Ouch.

As I write this, I am currently in Week 9. I have had my first physio session, but I still can’t drive and I can only swim with one arm, which is basically just kicking really isn’t it? I’ve never been a fan of kicking sets, and my coach Perry rarely gets me to do them, so it’s been a shock to the system. Let’s just say that I’m now very familiar with the design (or lack thereof) of the ceiling of the Grange Paddocks swimming pool. This period has certainly been good for my mental strength. I am fortunate that I can still use my legs. I’ve been able to walk, cycle (on the turbo inside) and even run now, as it doesn’t hurt my arm too much.

Work have been brilliant during this time, as I can’t always get into the office if my colleague isn’t in. I’m lucky I can do my work from home. However, I’ve never been so keen to get out of the flat and back to the office. There’s only so much hoovering you can do.

I’ve tried to make the most of the situation though and find silver linings. Everything happens for a reason. At the beginning of the year I wanted to improve my kicking but mainly focus on my cycling and running as there is still a lot of room for improvement. Careful what you wish for, I guess? I have now had 9 weeks of just kicking, cycling and running. It’s also given me the chance to spend much more time with Alastair. Instead of me spending half of February, March and April out of the country, I’ve been at home the whole time and he probably now wishes I was in Cyprus!  It also means that when I have fully recovered, we can have a holiday/training camp together which is something we wouldn’t have been able to do normally.

I’ve spent plenty of time trying to find ways to speed up my recovery time in the last couple of months. One of the suggestions was using a cryotherapy chamber. This essentially involves standing in a pod, for 3 minutes, at-90°c. I know what you’re thinking, it is mental when you say it like that. But I have to say that it’s easier than getting into a cold lake.  It doesn’t quite take your breath away like that does, plus you get to listen to music and dance stupidly whilst you’re in there! I went this morning before writing this and I am literally buzzing now and Alastair is looking at me strangely. I feel like I have new legs.

Ed Kirby, my physio, and Lorna Moulton (masseuse) have been slowly building my body back up. Perry has been fantastic and seems to know what my body needs before I do in terms of training. We haven’t had the “races” chat yet, but I am still optimistic that I will get a good second half of the season in, starting maybe as soon as July. It all depends on when I can get back in the water and swim properly.

Here’s to staying optimistic, focused and coming back stronger for a cracking end to season. I am so incredibly thankful for all your continued support.